I’m super pleased to announce two records coming out in March. The first to drop is called Brittle Love, and is a suite of unsung love songs made with a laptop, a lot of samplers, and old fashioned point-and-click mouse skills. A huge thanks to the Slip imprint for all their support in getting the music to this point over the last half year. Here’s the record’s lead track, Yesterday’s Bread Was So Much Better.

Artwork is by Dori Deng, and the 100-copy physical version includes a large-format print and forty minutes of conversation about the music, recorded in January in a favourite, now sadly departed, Neukölln bakery, dubbed onto recycled Children’s Bible cassettes and housed in a container made from soundproof foam. Got that? Right. On March 1st there’ll be an hourlong transmission on London’s Resonance FM during which I’ll talk to Laurie Tompkins about the record, some of my favourite-ever music by other people, and the relationship between those things. Fun sounds you almost certainly haven’t heard yet; tune in at noon.

The second, contrasting, cut is coming out March 16th and is called Tired Music. It’s a piece I’ve been playing for about a year since its first outing at Tokyo Wonder Site, and it’s taken care of by Simon Scott‘s beautiful Kesh label, home also to long-time heroes Machinefabriek and Lorenzo Senni. The aforementioned Rutger Zuyderveld took care of the artwork, and distribution is through Morr Music. As with the Slip release, it’ll be available via Bandcamp, Boomkat and Bleep, and also at iTunes if that’s how you like it. Here’s a dark snippet from the middle of the 24-minute piece.

It’s a great privilege to be out in a context like this, and so a major thanks to Simon, who is about to head on a North American tour. Also to Rosa van Hensbergen and Shaleigh Comerford, who listened and responded to an early version of the piece more than anyone else back in Japan.

Over the next few weeks, I’ll be playing many shows in support of these records – especially Tired Music – in the UK and Germany. Particularly exciting is a show with Arts Assembly and the mighty Richard Skelton at the De La Warr Pavilion on the 21st. See you somewhere along the way? Dates below. 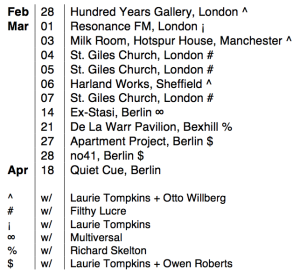