Together with ACM and Sarah Hill I just finished five UK shows that were packed and inspiring: a remarkable privilege to play. After the London premiere, The Biting Point described Fleck Flob Flop, the hour-long piece about an Old Lady and her husband I wrote for ACM, as ‘a total game-changer’ (to the game’s overall improvement, I hope!) and Fluid Radio published this warm, thoughtful and thought-provoking piece about our Vivid Projects show in Birmingham. Filmmaker Ismar Badzic rode with us on the bus from city to city to capture highlights of the thing for posterity: video online soon. Peep this beautiful photo by Sarah Hill of our S1 Artspace Sheffield gig, and put August 4th in your diary: I’ll be presenting fresh Fleck Flob Flopish material with percussionist Delia Stevens at Café Oto that night, as part of the lovely Slip imprint’s festivities there. Before then we go to Europe and we do a summery weekend of filming and recording in the UK, and we’re hungry for it all. 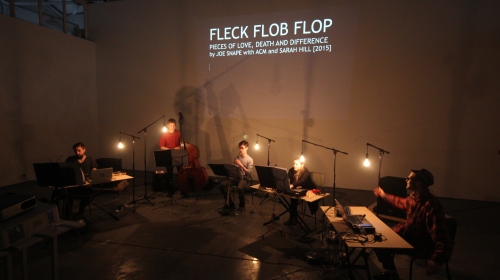 Massive thanks go out to the band: Michael Cutting, Vitalija Glovackyte, Michael Perrett, Otto Willberg and Sarah Hill; to promoters Jelica Obican, Laura Milner, Yasmeen Baig-Clifford, Louise Snape, Rob Hughes, Jenny Porter, and the International Anthony Burgess Foundation; to our amazing guests Bastard Assignments, Darren Joyce, Andy Ingamells and Sheffield University composition students, Dan Thorne, Tom Cowcher, Mersey Wylie and ACM’s extended line-up; to Ismar Badzic and Sam Hanlan for their documenting prowess; to all those who helped us push the shows; to the Ono label for putting out our tour record of which there are now only a handful left over at Boomkat and Piccadilly; to Julia Haferkorn for her advice and encouragement; and to Sound and Music for taking the gamble on us and having faith in the project from the start. Here, as a little token of our appreciation, is the last track from the aforementioned record for your streaming pleasure. Mmnhm.