After a weeklong residency at Islington Mill with Kaj Duncan David and Danielle Dahl, Michael Cutting and I played shows in Liverpool, London, Manchester, Aarhus and Copenhagen in January. The thing we made was an hour of loosely organised chaos: flashing lightbulbs, riotous drones, cyborg pop, webcam lego races, sensitive tape machine music, spoken word, all of it unpacked and packed back up every single night. Not any of our most refined efforts, but a thoroughly and bizarrely fun evening. Thanks to all of you who came out, and to Sound and Music for the commission. Rough-and-ready video edit here, brace yourself. It was cold at rehearsals in Manchester. 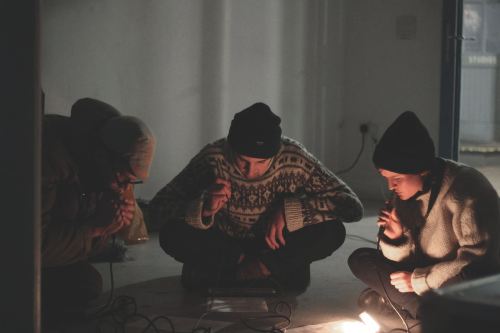 An exploratory residency with Erratica also happened in London the same month, and big thanks to Jethro Cooke for the tech wizardry, Liam Byrne for the digs, and Leonie Brandner for food. Tired Music happened a couple of times too: once at Spectrum in NYC – thanks to Michael Rose and to Lester St. Louis – and again at the Old Stone House in Brooklyn, alongside new work by Adele Fournet and Viola Yip – big up to Kim. Finally, I wrote a little number for the New York ensemble loadbang called Big Mouth, for mixed ensemble, click-track and video, performed in a huge room at DiMenna Center. Coming, perhaps, in a one-man format, to a tiny black box near you at some point in the distant future. To close, a deranged cut from the Erratica sessions, which sounds like how I imagine winter feels in Hawaii.